‘There’s a first time for everything.’ The well-known saying applies to many situations, but also to engineering. Our first dealcoholization system has been in operation for a long time. Time to write about it, especially as our customer is extremely satisfied with the result.

e Baltic Sea right across Germany. ‘Frei-Bier’, ‘Atlantik-Ale Alkoholfrei’ and ‘Bernstein-Weizen Alkoholfrei‘ are becoming increasingly popular. Non-alcoholic mixed beer drinks are also trendy. Here Störtebeker can offer its ‘Strandräuber Natur-Radler Zitrone alkoholfrei’ (‘Strandräuber natural Radler lemon non-alcoholic’). In the non-alcoholic beer segment, the dynamically growing brewery saw itself challenged not only by rising demand, but also its coherent impact on production. Störtebeker is a forward-thinking company that stays in tune with the times. Thus, with the development of the ‘Atlantik-Ale non-alcoholic’, it was time to invest in a special dealcoholization system.

For corosys, this was a good opportunity to implement its thoroughly planned dealcoholization system (DAS). Both parties knew that the beers and the diversity of Störtebeker‘s beer range are unique in Germany. During the course of development, it became clear that the plant could not be an ordinary one for Störtebeker. The vacuum rectification process is regarded as a proven technology in beer dealcoholization but, as always, it is all about the details. At Störtebeker, product quality is paramount alongside customer satisfaction. Since the alcohol is extracted from the beer under the influence of heat in a vacuum, the main concern was to keep this input as low as possible.

Due to the skillful process design and control engineering of the plant, it was possible to reduce the rectification temperature from normally >50 °C to only 38 °C. The beer is de-alcoholized from its original alcohol content to 0.0 vol %. 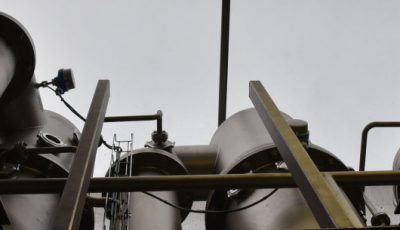 Hygienic design and good accessibility for maintenance purposes are, of course, guaranteed. For example, the DAS can be self-sufficiently cleaned via its own CIP without occupying the CIP station. A CIP system for such low flows (here 10 hl/h) is usually not available. To avoid spray shadows and to ensure the required cleaning speeds in all areas of the plant, close attention is paid to the accurate positioning of spray balls and bypasses as well as special CIP pumps.

First dealcoholizing a beer, then collecting it in a pressure tank, running it through a separate mixing plant and carbonating it afterwards meant unnecessary work for Störtebeker, which no one likes to do. Corosys found a way to avoid this intricate process by combining all necessary processing steps into one system. Therefore, from a process technological perspective, it is no problem at all to install additional dosages for aroma water obtained from the plant, wort, lemonade or sugar syrup. The following in-line carbonation is, basically, part of the plant. The dosages are freely adjustable and selectable by recipe. A subsequent flash pasteurization system ensures that each beer is immediately ready for filling and reaches the pressure tank microbiologically perfect for the duration of the dealcoholizing process.

What happens to the produced alcohol? The alcohol can be concentrated to up to 85 vol % via a rectifying column. With this strength it can be further used in the cosmetic and pharmaceutical industries. Part of the scope of supply of the entire system was also an ethanol metering skid prepared for customs clearance. It records the quantity of pure alcohol produced by the system with very high precision. The tank farm was additionally equipped with a calibratable loading station for delivery to tank trucks.

Everyone involved, especially the brewers at Störtebeker, are highly satisfied with the progress of the project, the implementation of the ideas and ultimately the quality of the products.

corosys supports Störtebeker with guaranteed on-site service by experienced employees to implement new ideas and to research further technical and technological progress at the new plant.

About the Author: Nadine Kerwel